The Modi government has once again extended the duration of the free food scheme for migrant workers and the poor in view of the Koro epidemic. At the same time, the central government has said that those who do not have a ration card will also be given 5 kg of free wheat, rice and one kg of chickpeas. The scheme has been announced under Pradhan Mantri Garib Kalyan Yojana Part-2. Those who have not yet got their ration cards can avail the benefits of this scheme. With it, if you want to create a ration card, you can create an online ration card by going to the nearest public service center in the state where you are staying 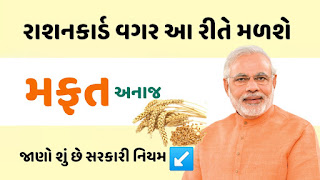 ⧭ The benefits of the free plan will now be available till November
Union Food and Supplies Minister Ram Vilas Paswan told the media on July 1 that in his address to the nation on June 30, 2020, the Prime Minister said that in view of the current situation in the country and the upcoming festivals in the country, the Prime Minister's Garib Kalyan Anna Yojana has been extended till November 2020. Has come

⧭ Ration will be available even without ration card
According to Ram Vilas Paswan, if one does not have a ration card, he will have to take his support and register, after which Cam will be given a slip. They will get free grain after showing that slip. The responsibility of the state governments has also been fixed for them. The state government should ensure the benefit of free rations to the poor laborers

⧪ The role of state governments in providing free rations is important
It may be mentioned that after the central government implemented the lockdown, it also announced to give free rations to the beneficiaries who do not have ration cards. Many states and union territories, including Delhi, have started giving free rations in compliance with the order. The scheme was earlier implemented for three months but on June 30, PM Modi in his address on behalf of the country extended the scheme till November. The PM said the scheme would cost more than Rs 90,000 crore to implement by November. The scheme will cost up to Rs 1.5 lakh crore from its inception till November

Find Rasan card of all State online in single app